We love collaborative activities and are happy to participate in the projects requiring great management, marketing, and social media skills. We are still inspired with the projects we’ve done and happy to share them with you. 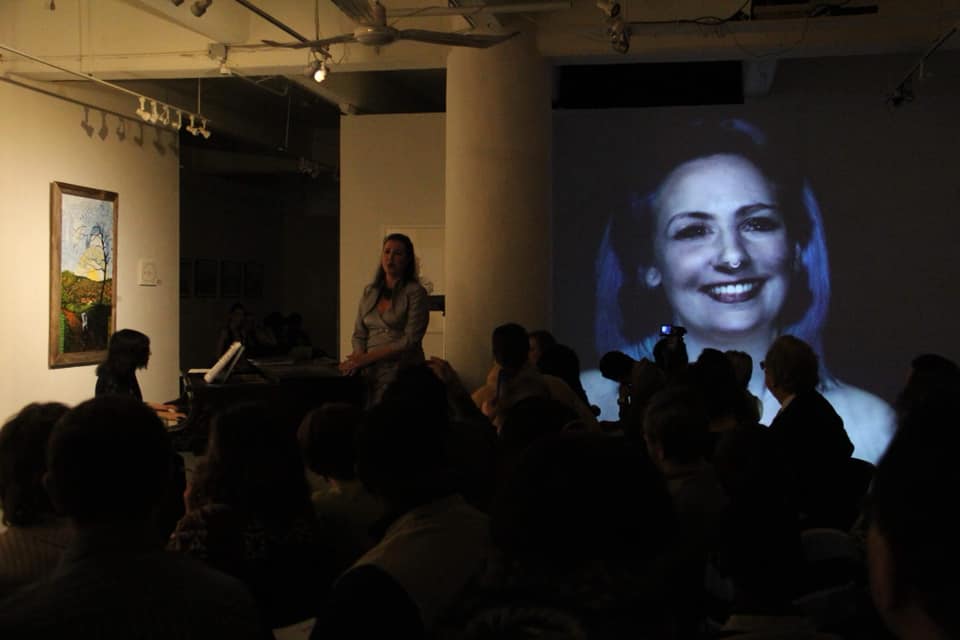 The project is a collaboration between theatre and visual artists led by Aubrey Saverino in partnership with RE:ARTISTE. Daughters of Troy uses classical text, visual art, music, dance and current events to deconstruct female archetypes through the lens of the Trojan War. Visual artists - Kate Goltseva, Hadieh Afshani, Michael Nicholas - created the artwork and site specific installations at the residency on Governors Island in relation to female characters of the era of the Trojan War, to present the stories of Oenone, Electra, Penelope, Clytemnestra. Curated by Natalie Burlutskaya.

In Summer 2016 Daughters of Troy was granted a week long residency on Governors Island in New York through Barton Booth's MAKE ROOM initiative.

In November 2016 this interdisciplinary project was performed at the Dixon Place, New York City.

This is work in progress, to be continued.

Our Art & Social Project "The Female Power" is a platform for self-identified female artists and women of all occupations to connect and speak up.
The fact that in any area we mostly have been hearing men’s voices loudly is one of the causing factors for an unbalanced, unfair, and less emotionally intelligent world we live in. Therefore there is urgent necessity of women’s voices to be loud and heard enough in order to balance the society. And, of course, as a result it helps toward peace and harmony in the world.The Female Power will be featuring and speaking about not the artists only. We are happy to feature women and talk about women's achievements in any industry and field. We would like to connect women of different occupations and professions in order to build a powerful network of strong personalities to be able to make positive changes in the world.We encourage artists, writers, photographer, actors, directors, and all other creative women in this community to find and help us feature all prominent women around the globe.

In 2016 we initiated a campaign called #ICareFor - artists are sharing their concerns, local and global issues they're caring for and about. This campaign brings in touch many artists from different parts of the globe. 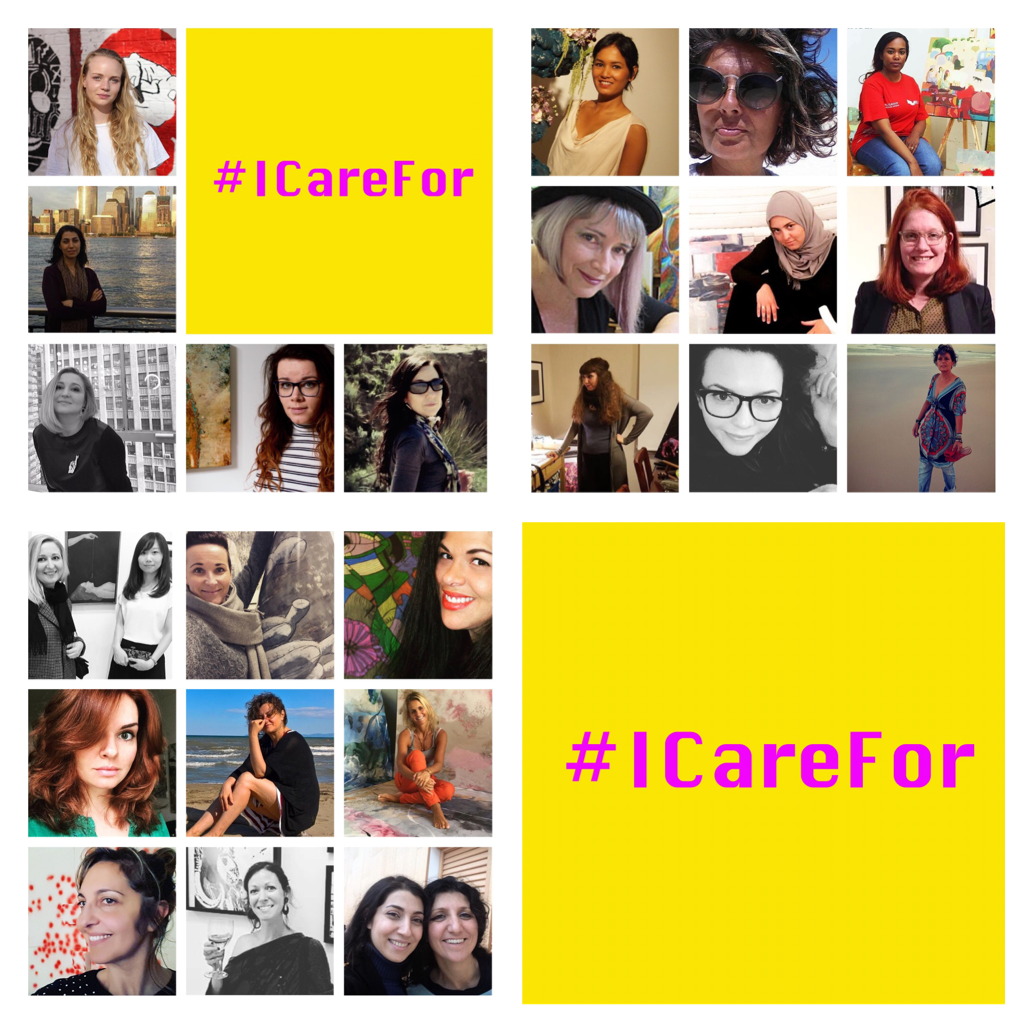 RE:ARTISTE curated the art & social project, "The First Supper", and hosted its first public presentation at our 2nd edition of the "Show Your World" international juried exhibition at Gallery MC, November 2016.

In January 2017 the installation was invited to be shown in Toronto, Canada, at the Feminist Art Conference. After that, the elements and derivatives of the installation were exhibited by Hadieh Afshani and Shirley Siegal in New Jersey (USA) and Israel.

What is this project about? Two female artists, Hadieh Afshani (Iran) and Shirley Siegal (Israel) met at our first "Show Your World" exhibition as participants. Their paintings were placed next to each other, showing that art has no boundaries despite the long-lasting conflict among countries in the Middle East.

The both painters were clear about that women's voice is not heard enough in the Middle East. Despite the fact that Middle-Eastern women can get a good education now, the social equality of men and women leaves much to be desired; and women's opinion is not heard when discussing and fixing social and political problems. Imagine that just a couple of decades ago, women could be stoned to death in Iran, and it still can happen in Saudi Arabia.

What is even more dangerous is that ISIS and Taliban became a threat to the whole world.

The installation "The First Supper", created by Hadieh Afshani and Shirley Siegal, curated by Natalie Burlutskaya/RE:ARTISTE, is an invitation to all of you to sit down at the  dinner table and talk. An allusion to the Bible, this installation is not the end, but the beginning.

The work on the installation has been done on two continents, simultaneously: part of the installation was created by Shirley Siegal, based in Israel. Another part was done in the United States by Hadieh Afshani. As a team, we have been constantly skype-talking, exchanging emails and text messages, chatting via phone to make our distant collaboration productive.

How does the installation look? The dinner table full of meaningful artwork is a centerpiece: there are painted tablecloth, cutlery, plates, mugs on it. A painting depicting the architectural masterpieces destroyed by ISIS or Taliban is placed on the wall. The phrase 'First Supper' is an allusion to the Bible's "Last Supper", and, when looking at the setting, you can also imagine some ancient or Biblical scenes. 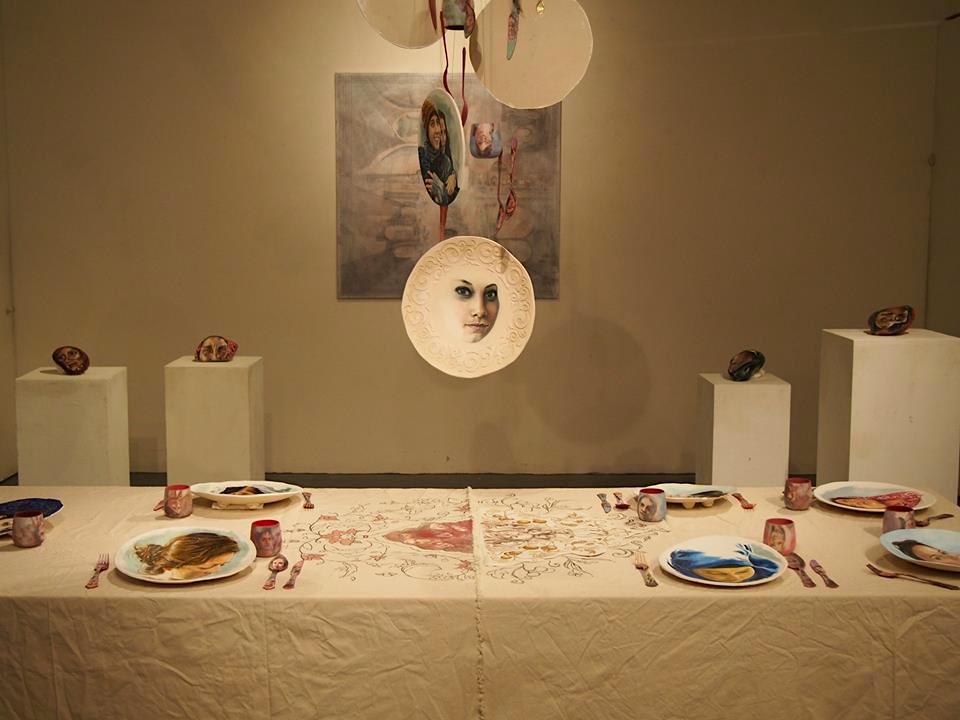 Along with the installation, a series of events were produced by RE:ARTISTE. The project aims at informing people, educating them, answering 'embarrassing' questions.

Panel discussion, "Questions You Were Too Embarrasses to Ask", gathered people of various cultures and occupations: our guests were artists, diplomats from the Israeli Consulate, members of Women's Caucus for Art, United Nations, friends, and families. Our panelists were the project creators Hadieh Afshani and Shirley Siegal, choreographer and activist from the Syrian-Jewish community Florence Nasar, human rights activist, film maker and theologist in exile Mahboubeh Abbasgholizadeh.  Curated by Natalie Burlutskaya, moderated by Zafreen Mahfooz. 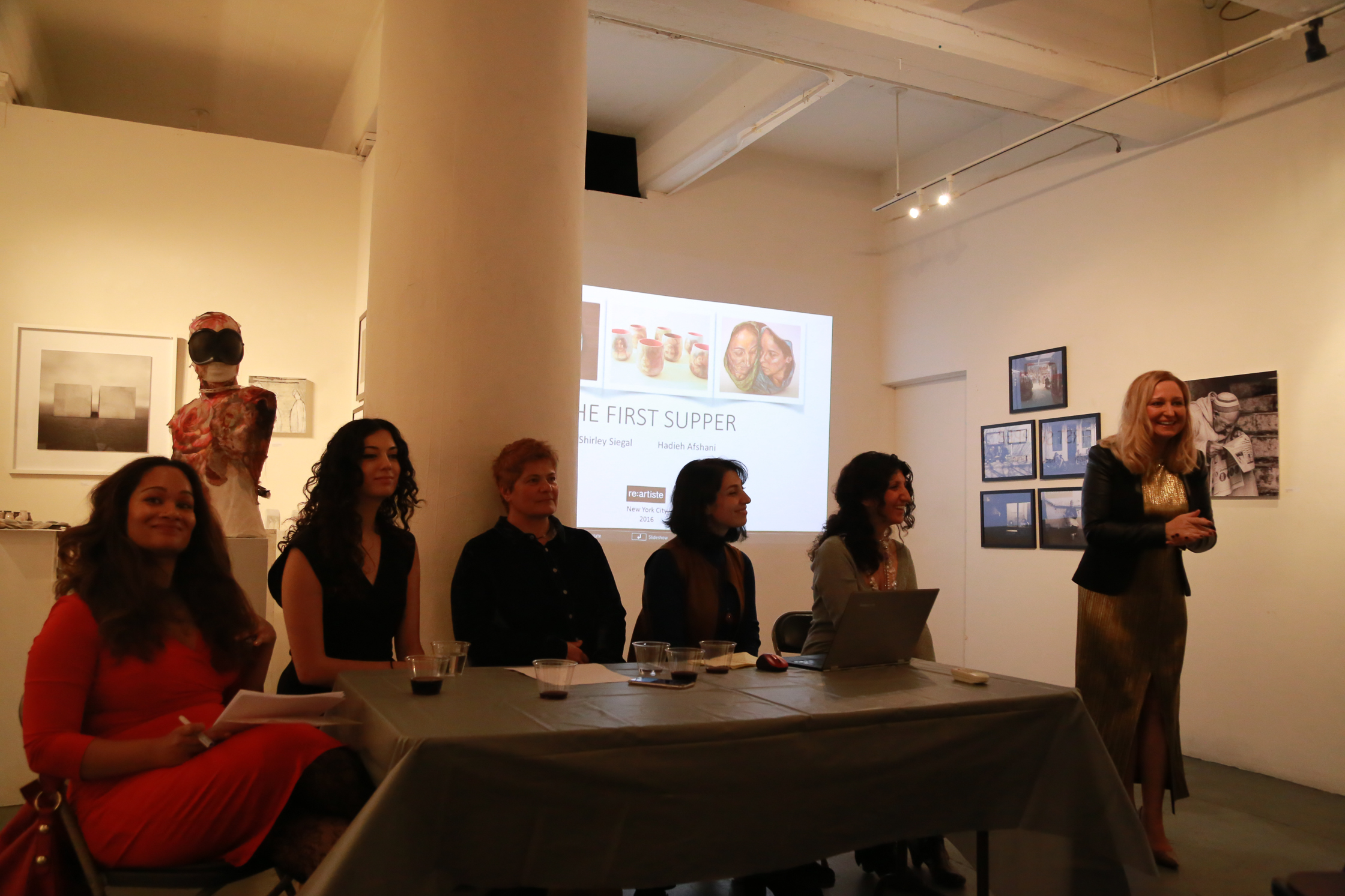 We hope, this project resonates with your cultural and social values. We appreciate your support. Should you wish to donate to "The First Supper", please use THIS LINK.

Theater + Visual Art: "Kiss Me or Cut Off My Head"

Theater, Poetry, Photography collided in the modern retelling of the Medusa myth. We were happy to curate the visual art exhibition for this collaborative art project.

"One of the most thrilling parts of this production to me is the partnership with RE:ARTISTE. They have connected us with Kate Goltseva and curated a beautiful collection of her photography that we are using in the show. It isn’t simply a play being performed in an art gallery, it’s a wonderful collaboration between a visual artist and theatrical artists." - Brooke M. Haney, actress and playwright. 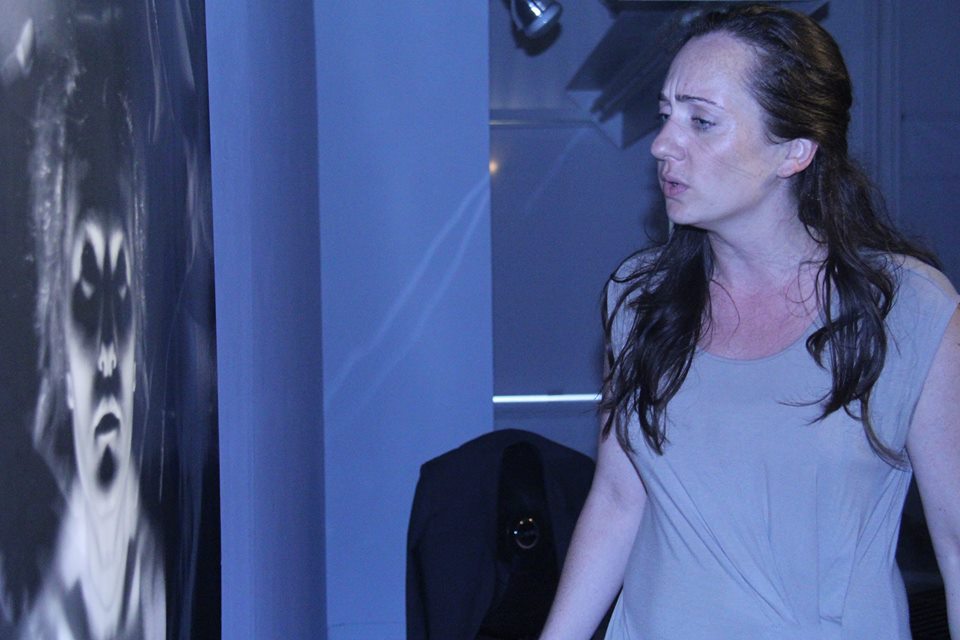 Press about "Kiss Me Or Cut Off My Head":

A collaborative event of RE:ARTISTE, Leo Rapini, and Soho Photo Gallery: an interactive coaching session on how to become a successful artist. Many artists came to Soho Photo Gallery to learn tips and techniques from Leo Rapini and RE:ARTISTE. Great ambience of the Soho Photo Gallery, one of the oldest art spots in New York City, is always a huge inspiration! For more tips and workshops please visit our blog and join our networking group, "Art Terrace". 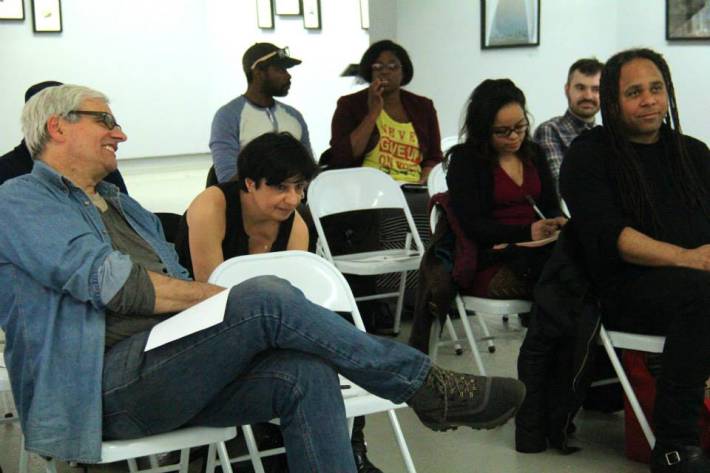 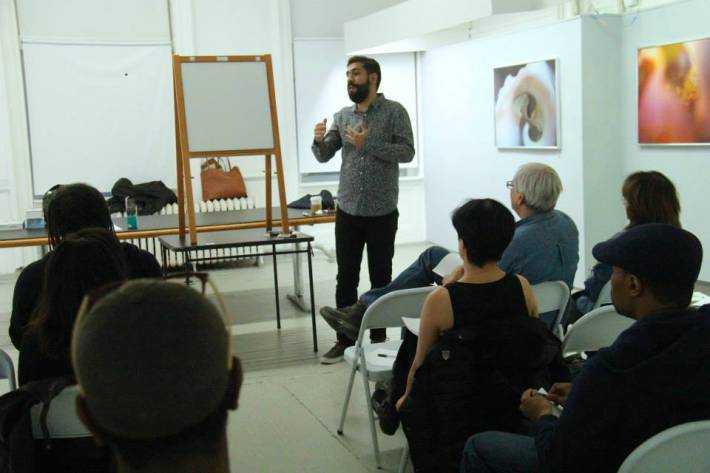 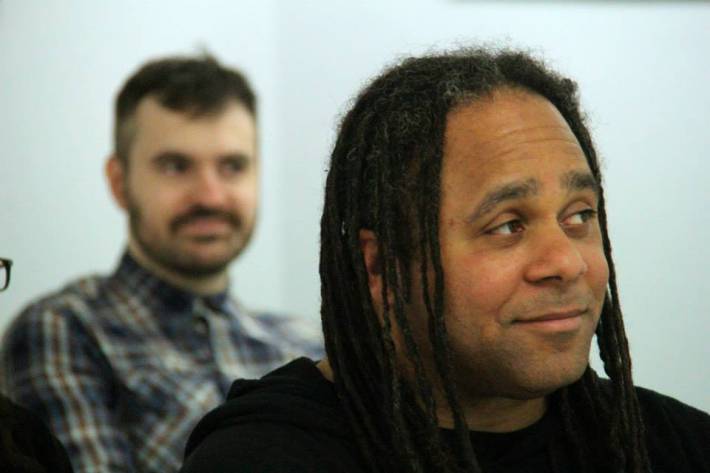 "Fall in Love with Dance and Art"

Solo show by Alvaro Montagna was featured at Hudson Dance Studio, NJ, from February through September 2015.

This beautifully designed studio is a great place for people of all ages to dance, socialize, enjoy art, participate in various themed events.

The inaugurational event held on the St.Valentines Day was celebrating love, art, and dance. 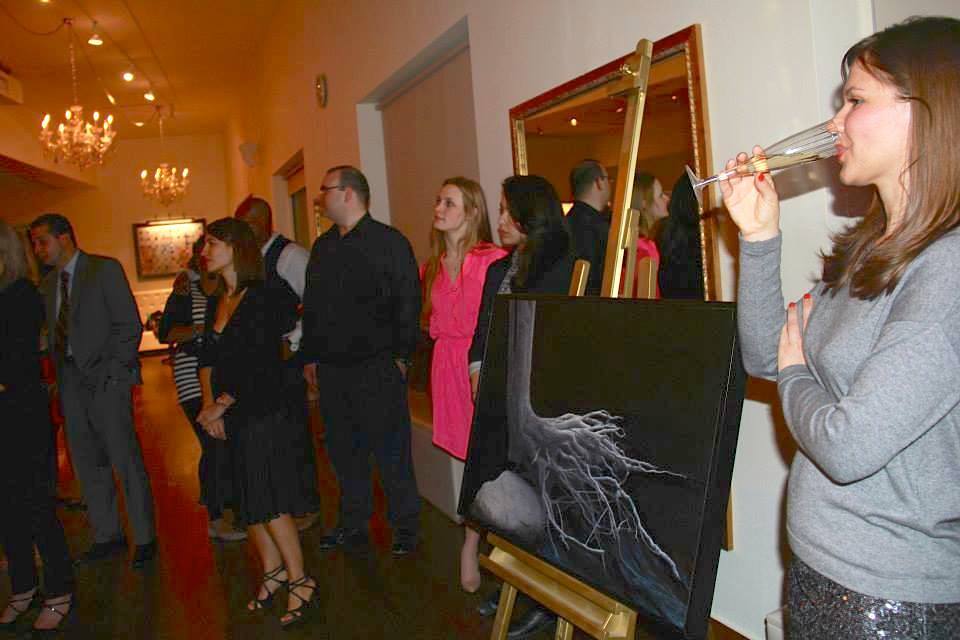 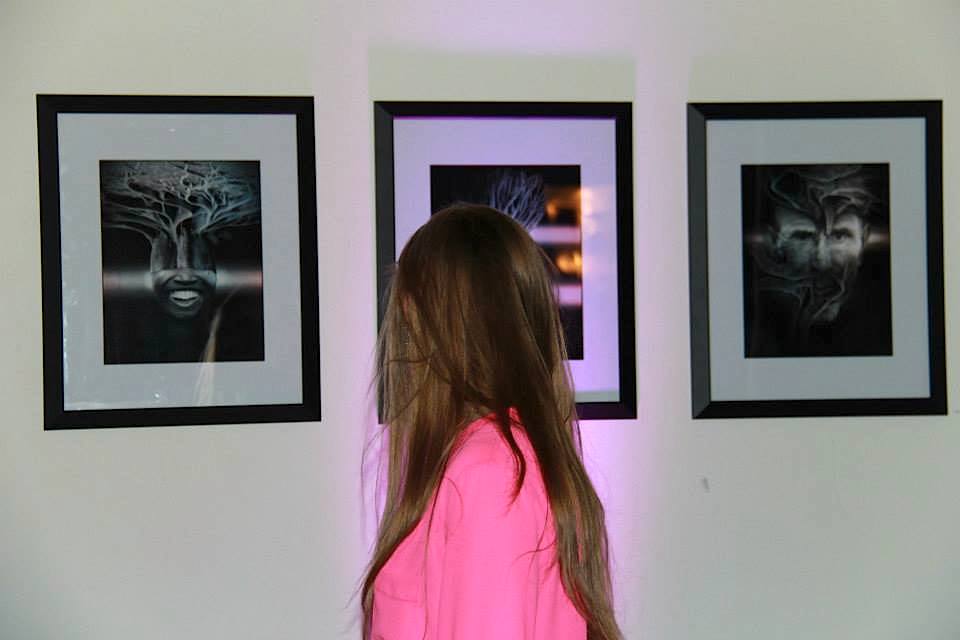 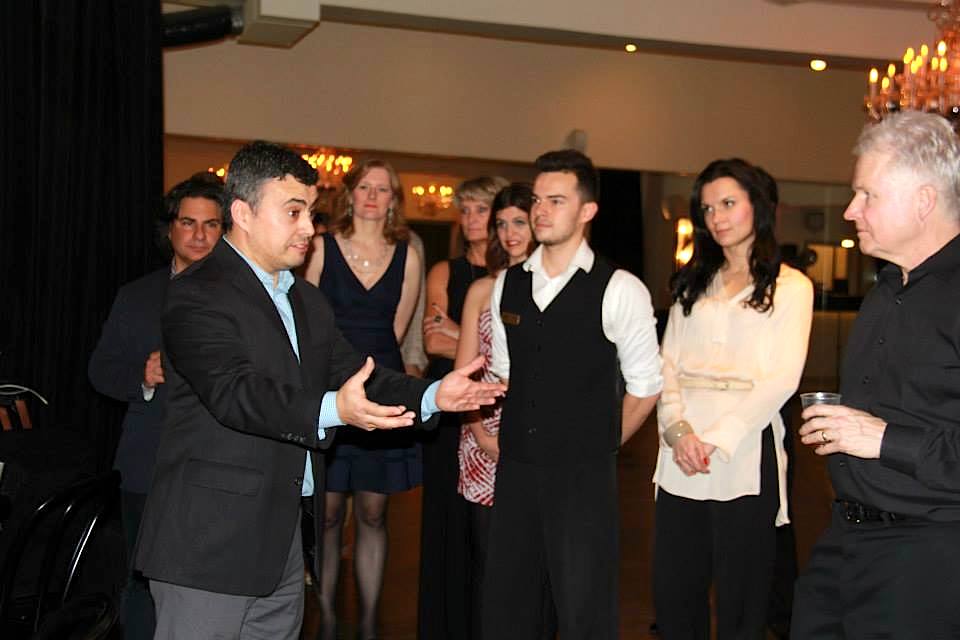 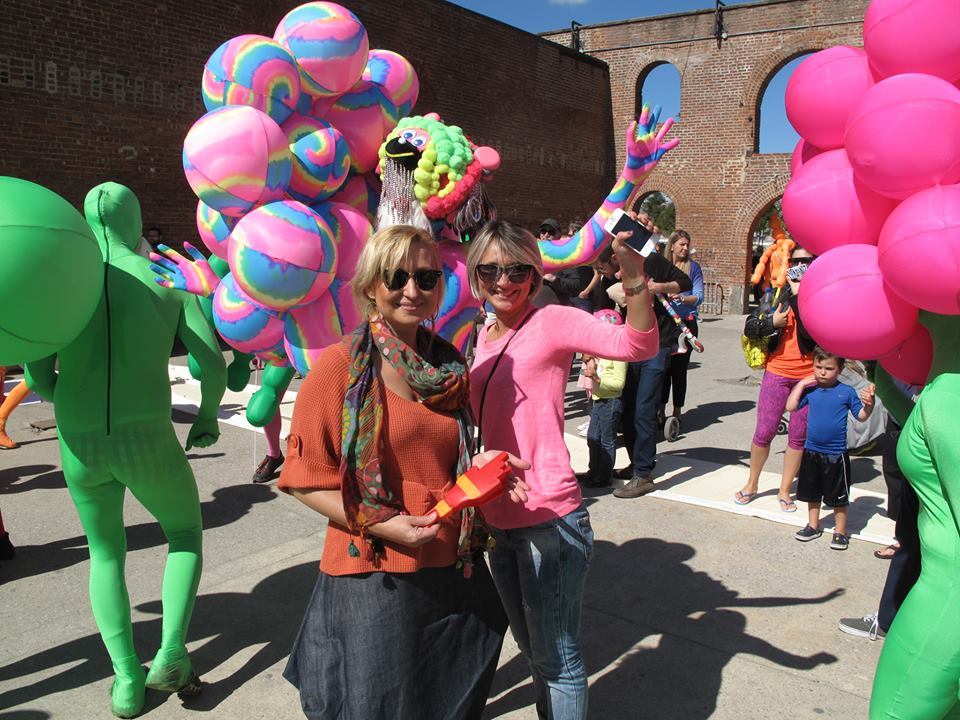 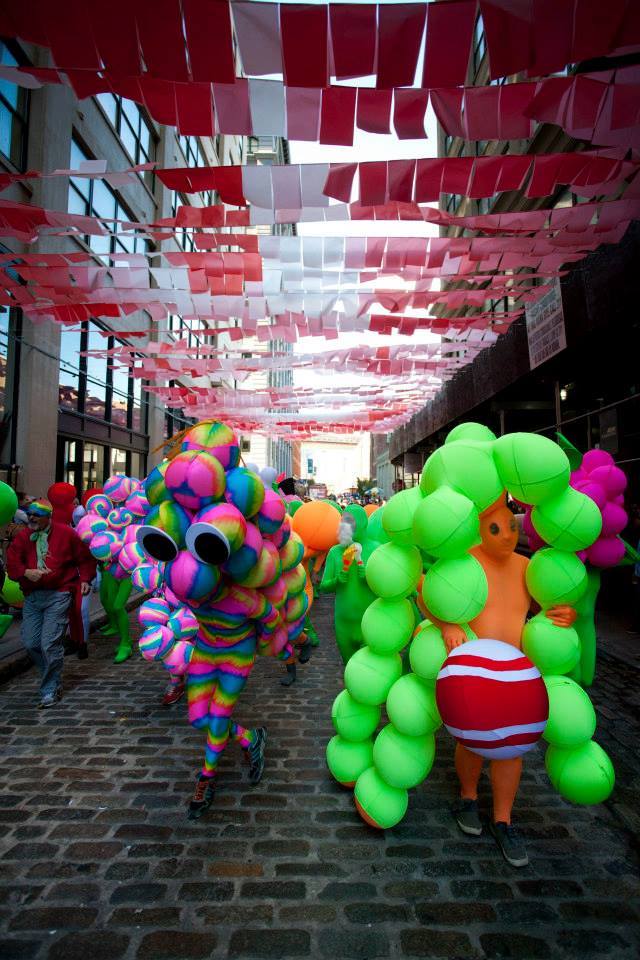 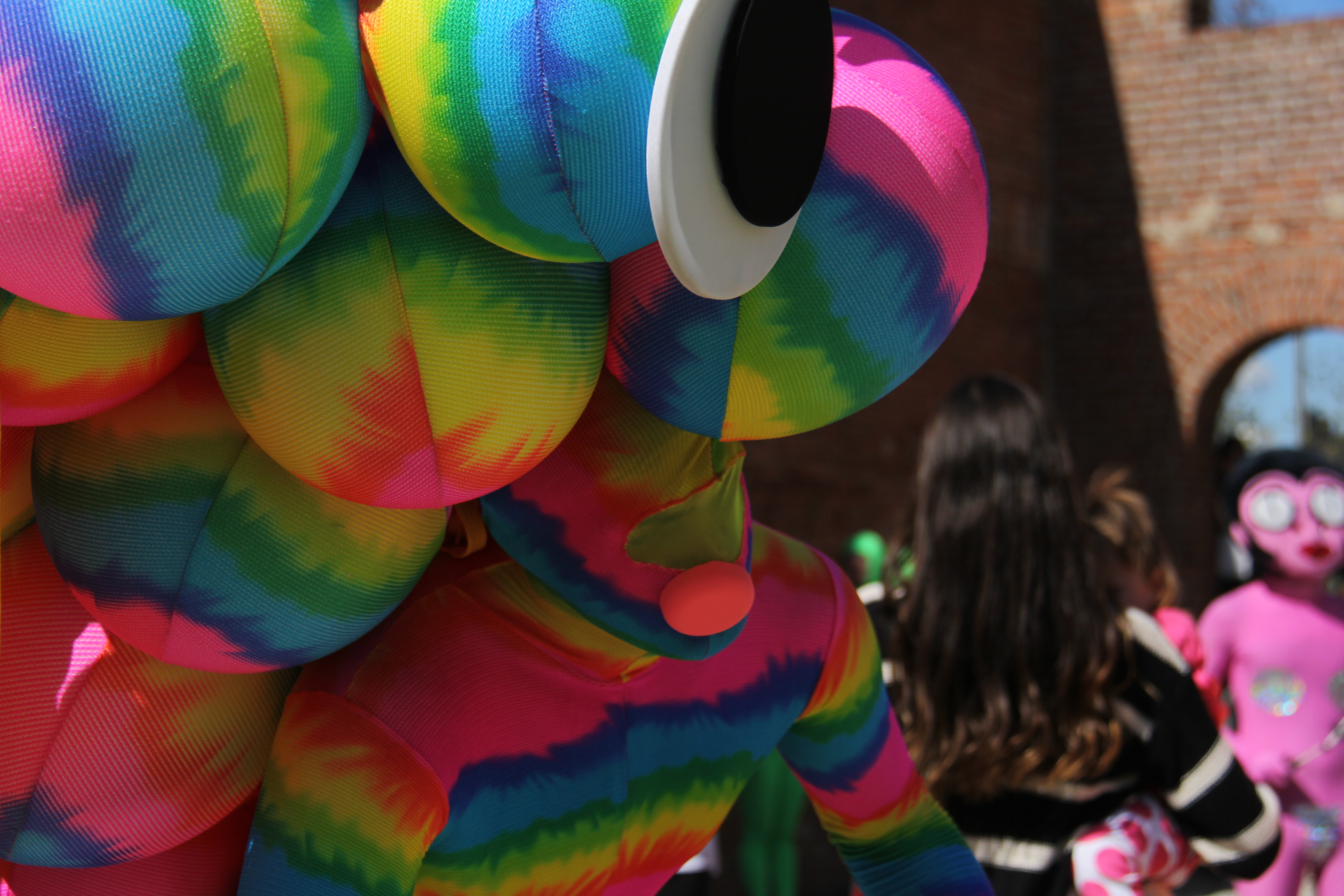 The association of Unicycle Productions and ReArtiste brings internationally renowned artist and provocateur Andrey Bartenev and his bold and dynamic vision to the streets of New York during the DUMBO Arts Festival in Fall 2013.

Art in Real Interiors. Collaboration with Pepela Restaurant and Gallery. 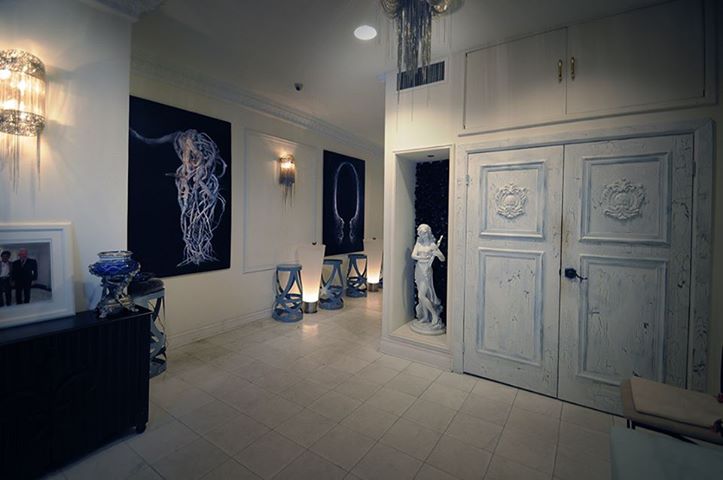 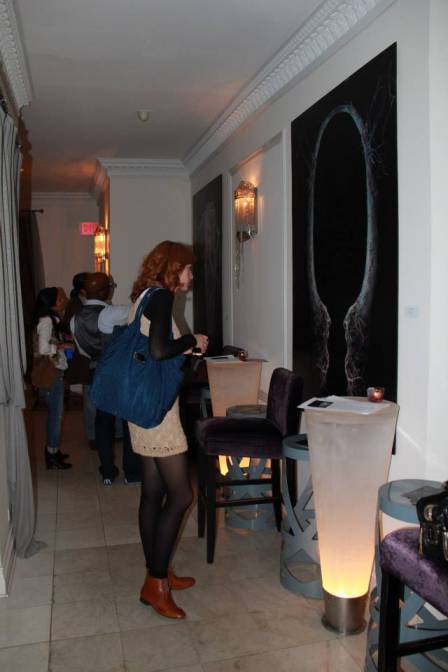 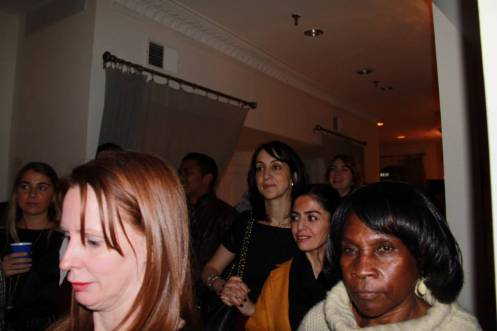 Alvaro Montagna's mixed media art was exhibited at Pepela New York. Montagna’s “Life After Life” series wan among top 10 at the “Artists Wanted” competition in 2012 and was displayed in Times Square. This time visitors had a chance to view Montagna’s enigmatic artworks literally close and personally: the art became a part of the Pepela interior. The idea behind the exhibit was to show art in a real environment such as home, office, or an entertainment space like Pepela New York. 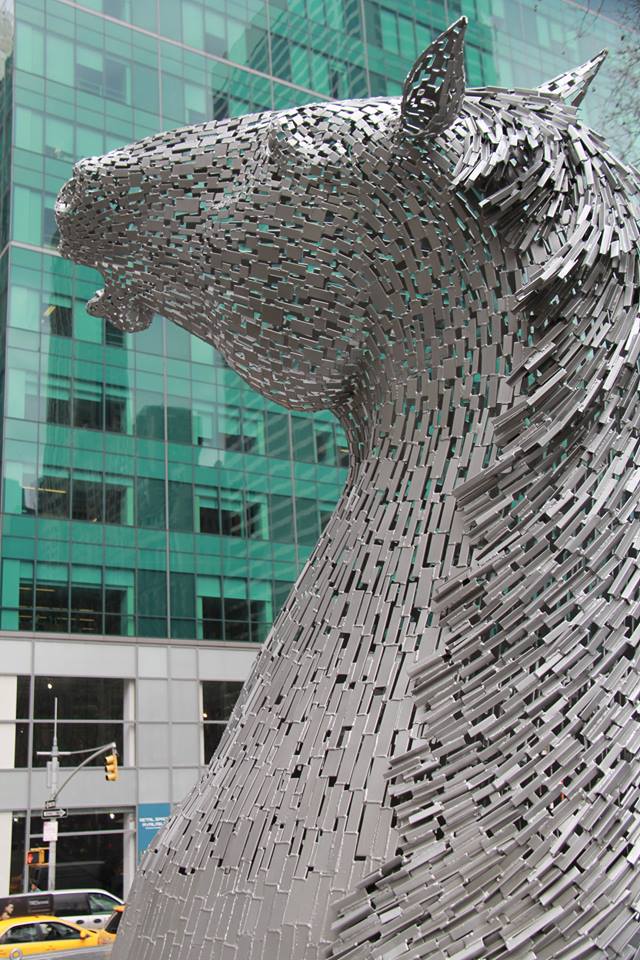 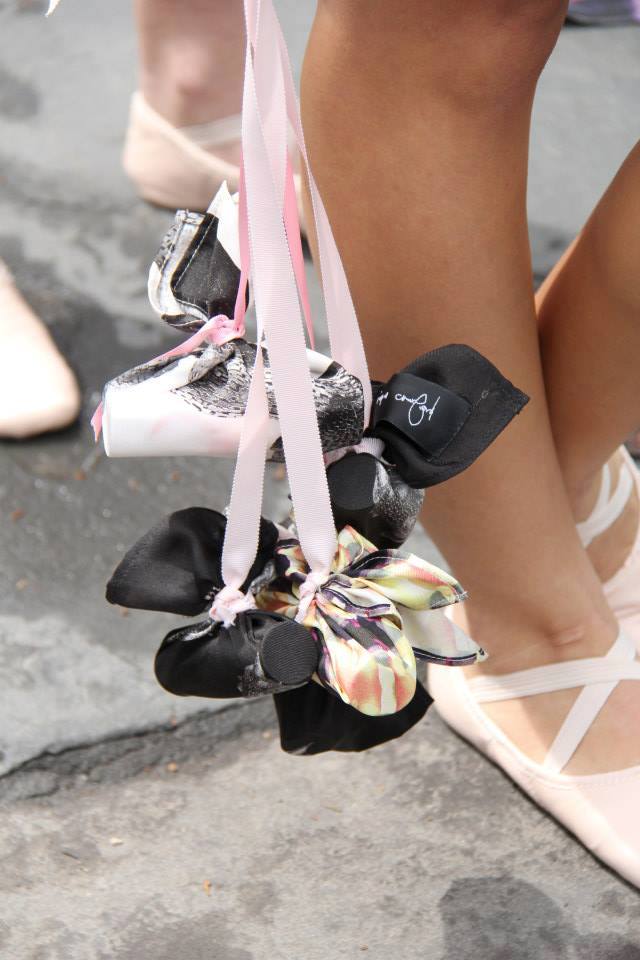 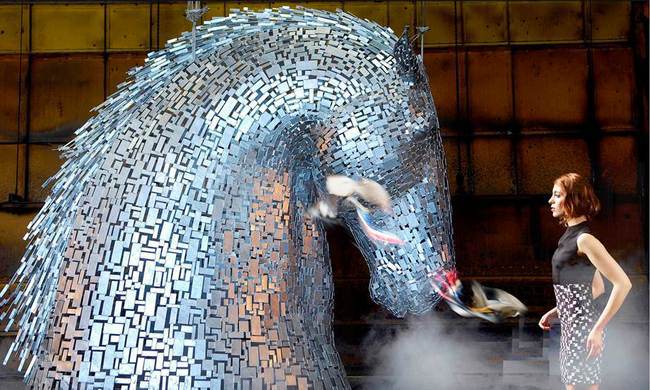 The maquettes of the famous Scottish sculptures, THE KELPIES, by Andy Scott, were brought from Scottland to Bryant Park, NYC. Those 20 ft. massive silver steely horse heads were a centerpiece for the performance of silky, ethereal Scottish damsels, bearing gifts of Spring in the Iona Crawford BEAUTY AND THE BEASTS Capsule Collection Launch. An interactive performance included live music from Scottish singer and songwriter, Hannah Read. 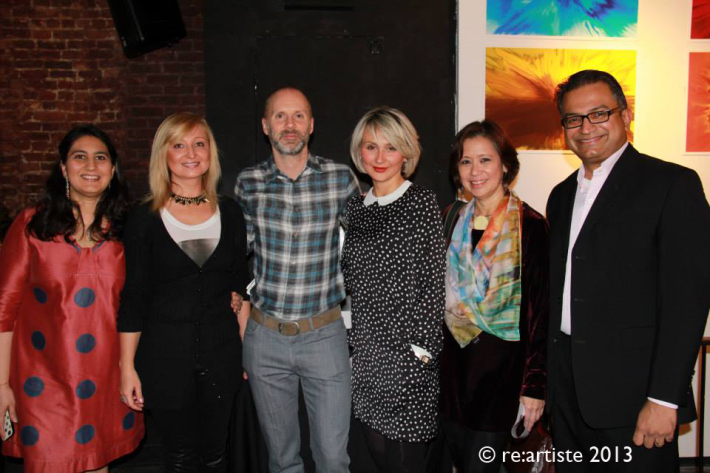 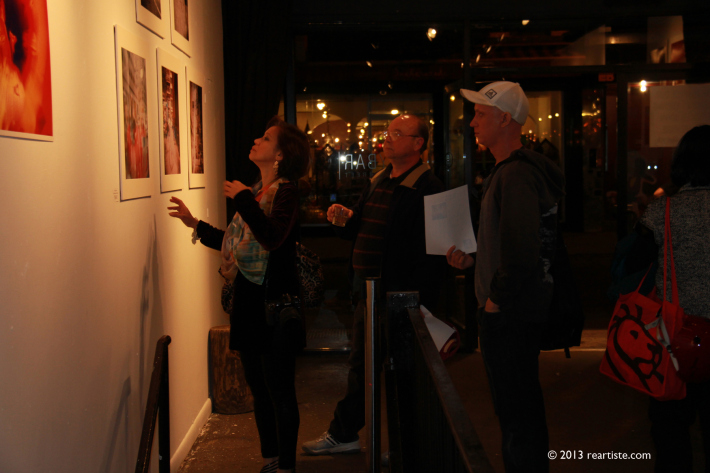 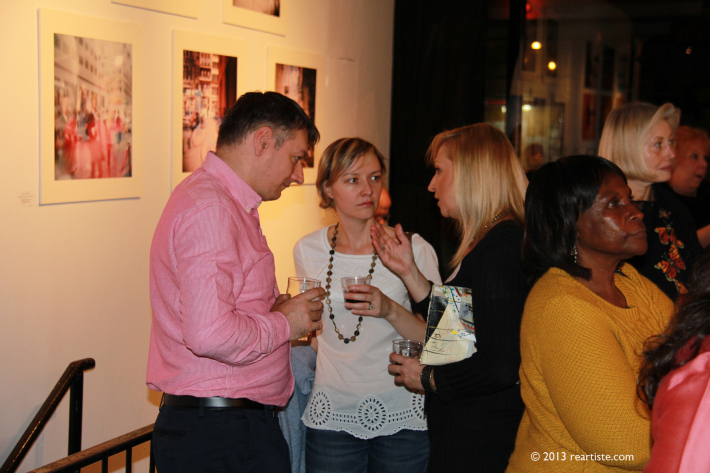 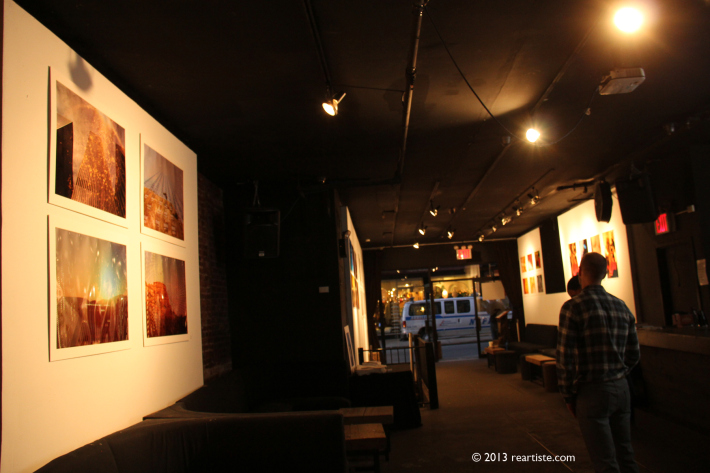 This show, with a literally teasing name, showcased five art-photographers. All of them experiment with shooting of simple and common things, such as water drops, city scapes, or manikins, to create digital paintings and provocative illusions out of film and digital photo images. 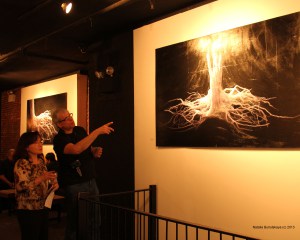 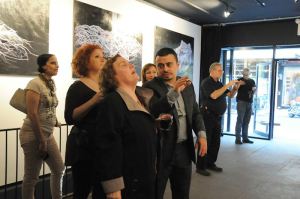 Intricate, mysterious series of mixed media artwork by Alvaro Montagna was on view at dynamic and edgy Lower East Side of Manhattan. Nine works ranging in varied sizes averaging 72 x 60 inches were exhibited in May 2013.