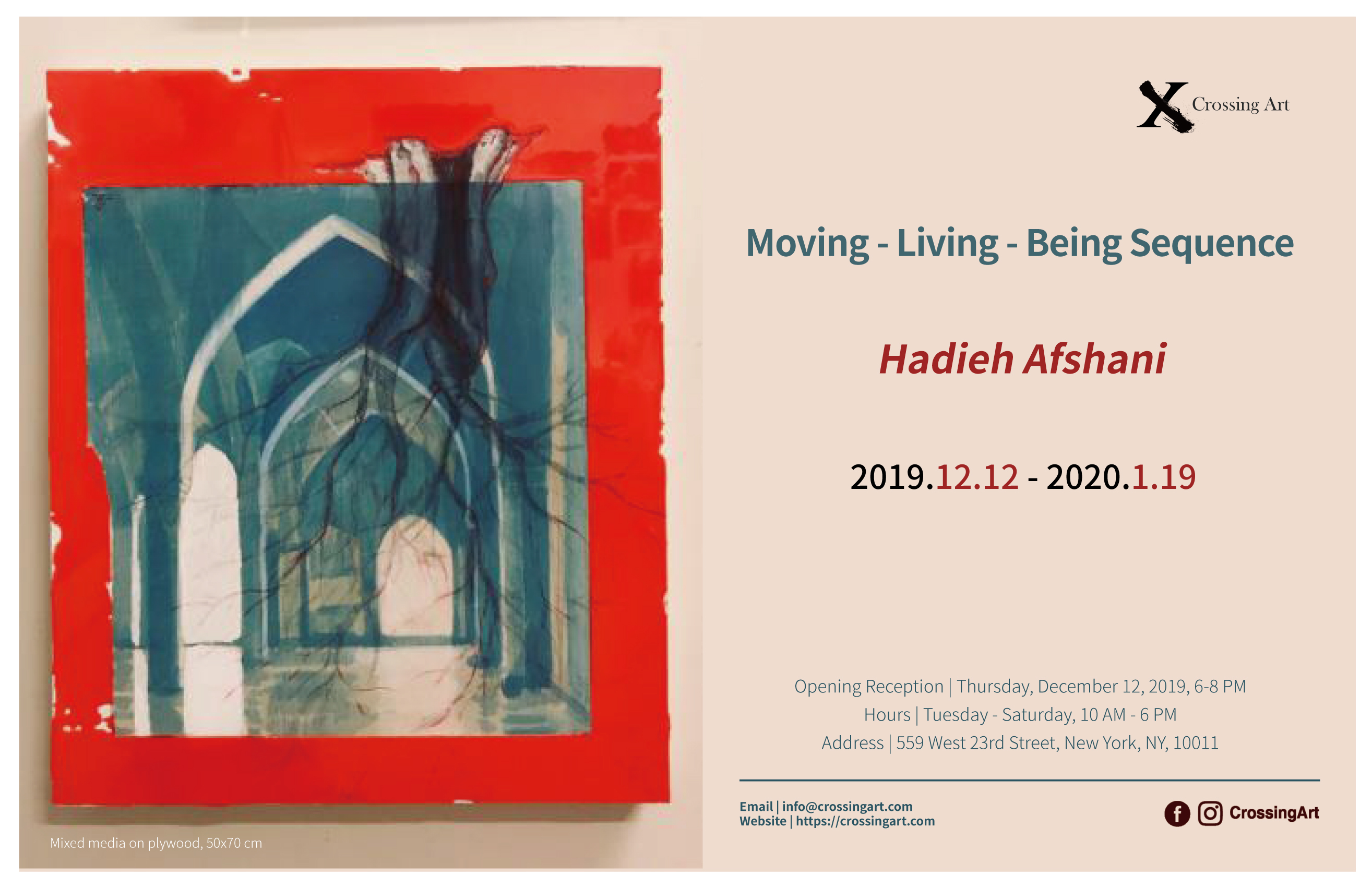 Crossing Art is pleased to announce: Moving - Living - Being Sequence, a solo exhibition featuring the series of artworks by Iran-born artist Hadieh Afshani. By utilizing painting as a contemplative vehicle, Afshani’s creative exploration focuses on the notion of a place: what does become your living place, after you are constantly changing spaces? What is moving and what is being? In order to differentiate a place and a space, Afshani borrows the definition outlined by Yi-Fu Tuan in Space and Place (2001) — a place is the center of felt value where biological needs, such as those for food, water, rest, and procreation, are established; a space is more abstract and allows movement, whereas place is paused.

Afshani often depicts intimate spaces such as bedrooms and apartment living rooms. The result thus looks like an intimate visual diary recorded by a woman with a Persian-poetic view of experience. She uses metaphoric and metonymic visual elements that refer to transience, including doorways, corridors, or light coming from one space to another sited within intimate places and interiors. These spacial relations depicted show the feeling of temptation to choose one path over others, taking the risk of going through a chosen path, and then again facing the possibility to change her mind. By doing so, Afshani examines the mindset and the emotional journey of her as an immigrant.

Being secular, Afshani is also inspired by the historic and poetic pre-Islamic aspects of Middle Eastern architecture. To her, architectural places represent human needs according to the particular culture and they are often based on our individual preferences and lifestyle. These architectural elements, therefore, describes the intimate experiences which she has personally had been through. When viewing Afshani’s works, one could feel a poetic nostalgia for the ancient culture and a connection that the artists herself feels with her ancient Persian roots.

Hadieh Afshani (b.1982, Iran) is a fine artist and art educator. She received her Master of Arts from Griffith University - Queensland College of Art in Australia, where she lectured as a professor. Her life path is a way of an immigrant who first immigrated to Australia, then after ten years, she decided to move to the United States. Afshani uses literature, poetry, and history as a basis for her creative process. Medium wise, she uses oil paints on wood panels instead of canvas, since she believes woods can better reflect her approach. Afshani is also a national and international award winner and has been a finalist in numerous Australian and international art awards and competitions.